Recently, we exhibited a booth at Milan Design Week (*) held in April 2018, in order to promote the metallic pigment “Chromashine®” to the world and expand the possibilities of the material. The MTRL team at Loftwork supported the planning, designing, and production of the exhibition.

※ Milan Design Week
An exhibition that is held at the same time as the International Furniture Fair “Milan-Salone International Furniture Trade Show” held in Milan, Italy every April.
Many companies and designers have exhibits at various locations around Milan, and creators gather from all over the world.
Toyo Aluminum Co., Ltd. exhibited at Material Village 2018 held at Superstudio Più, one of the largest venues in Milan Design Week.

We want to emphasize “design” rather than “function”

Toyo Aluminum Co., Ltd. occupies a large market share in functional metallic pigment, however, the issue was that it has not been able to promote it very much from a design point of view.

On the other hand, Chromashine® which we exhibited is an aluminum pigment for which design is its main characteristic.
It was necessary to promote it in a different manner than for industries that require existing functionalities. We received a request to promote the pigment which can only be made by their company, by drawing attention to “design” rather than “function,” and doing so in Milan where the discriminating eyes of the world come together.

How to maximize the features of the material

Chromashine® is a pigment with aluminum flakes as the substrate, and the surface layer is covered with silica and plated with silver. Strong interference colors are obtained due to the difference in the optical paths of the reflected light from the silver plating layer and aluminum surface. Even though it does not contain any pigment, it shows vivid colors and glows from the reflected light. In order to draw out the beauty of the interference colors, and have people visiting the booth experience the changes in colors, we devised the method of expression as well as the method to paint the pigment.

Realizing an installation that allows you to “experience” the charm

With architect Yukino Furuichi joining the team, we planned and produced the exhibition. We examined all possibilities while iterating on prototypes, in order to find a method that would be able to maximize the appeal of the material. Eventually, the main point became an installation that allows you not only to look at the material but also to “experience” it. An exhibition was created which expresses that the material is from Japan through the use of “Noren” shop curtains and the Japanese traditional stripe pattern. Also, the interference colors which are the main characteristic of the material could be experienced to the fullest by walking through it. 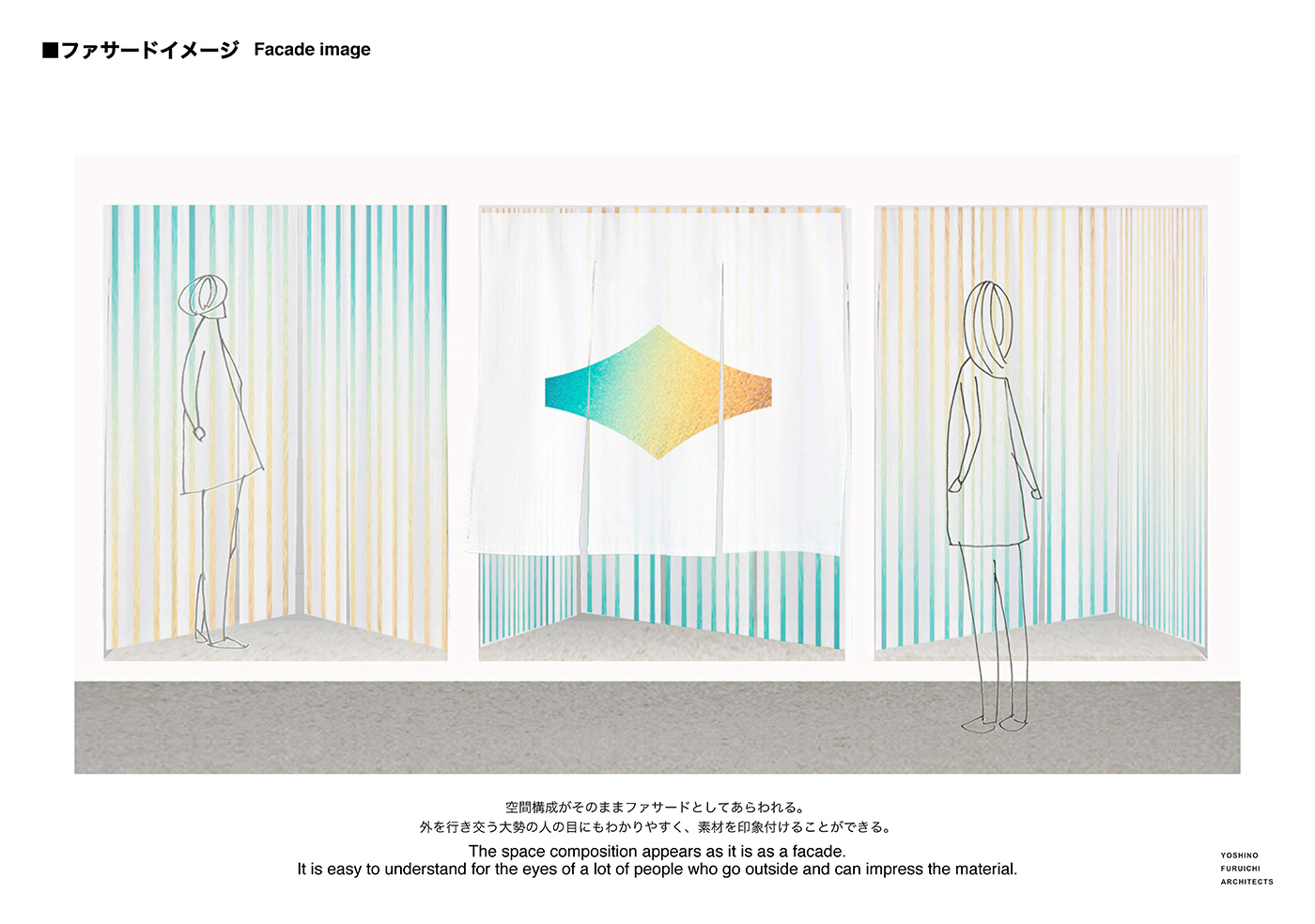 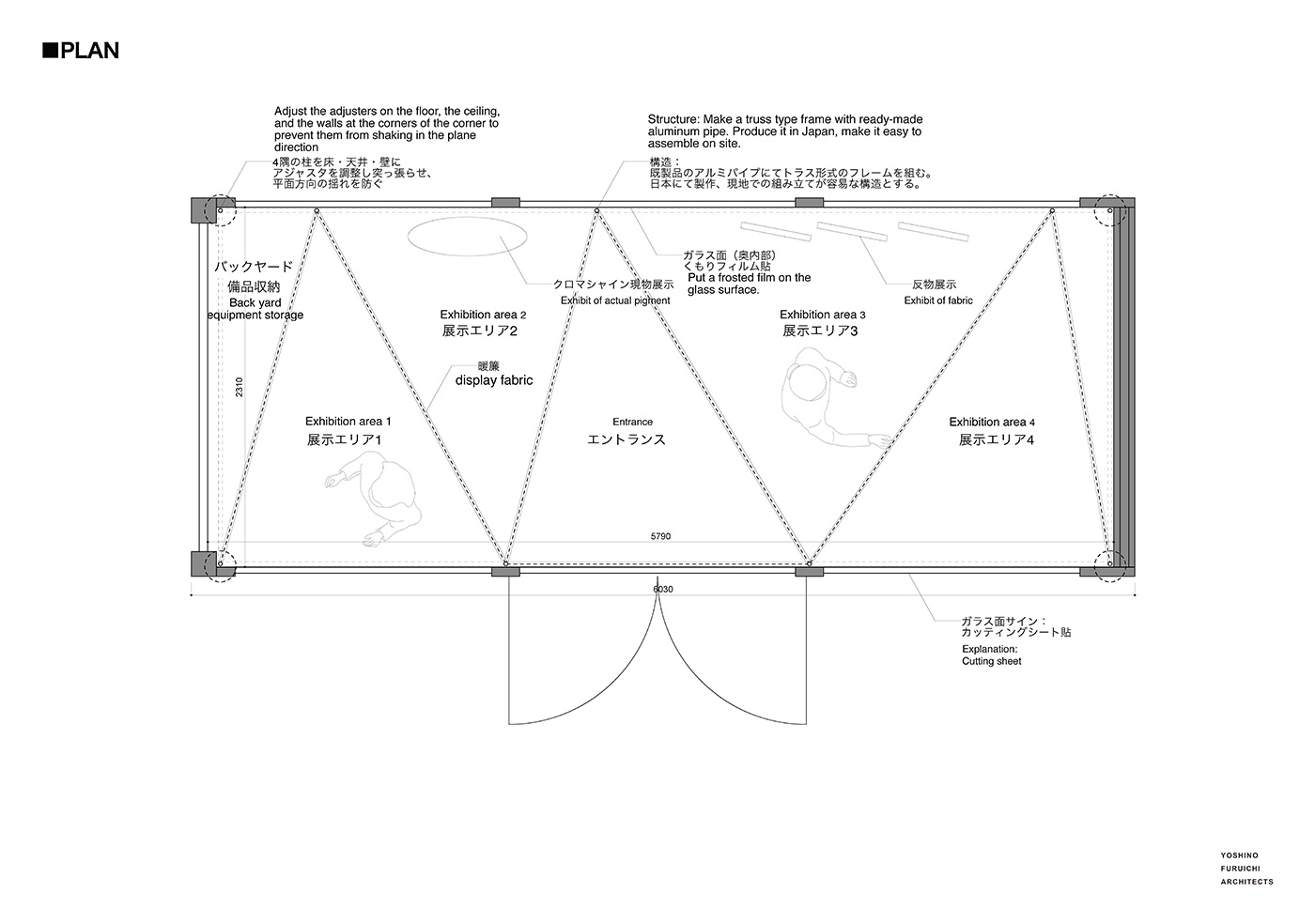 The shine of Chromashine® under the sun of Milan was more beautiful than we had imagined before going there, and it was a very good exhibition booth attracting a lot of people. Many people visited from morning until evening during the exhibition. Visitors came in one after another up to 5 minutes before closing, so we had no time to rest which was a cry of joy.

In Japan, we target certain industries to market the products, but in Milan, we had many contacts with designers from industries we cannot meet easily on a daily basis. There were some designers that said that they would like to decorate the exhibited fabrics in their office and wanted it sent to them. Going to such an international exhibition enabled us to encounter unexpected people and ideas which were beyond own, and experience the expanding possibilities. MTRL’s design made a big contribution, and we are very grateful of that.

The characteristic of Chromashine® is the beauty of its interference colors, but the most attractive point to me was that the colors are the wavelength of light itself. By being surrounded by this color, and looking at the color changes, I thought that it would be possible to create an exhibit that allows you to experience the colors of light. Since Chromashine® is a pigment, various possibilities such as painting and printing were considered, but when we reviewed the samples etc., we had a feeling that we really wanted to move it so we could view the interference colors. By attaching it to cloth, you can see it changing into various colors by the way the cloth fluctuates, so we designed a space that allows you to view it while walking through it just like a “Noren” shop curtain. You can touch and move the Chromashine®, making it possible to experience the colors of light more realistically.

I cannot forget the surprise I felt when I first saw Chromashine®.
Despite the fact that it contains no pigment there are many variations in shades, and it changes to a completely different color just by slightly changing the angle at which the light hits it.
I wanted to express this surprise in a straightforward manner.
However, because it is normally used for car bodies and cosmetics, a processing method that “paints it on cloth at even intervals” had never been done at Toyo Aluminum. Therefore, it was necessary for the project members to develop a manufacturing processing method by prototyping it themselves.
At the same time, it was necessary to consider potential damage during overseas transportation, as well as overseas construction, durability, and safety, so it was an exciting project that always required flexibility in judgment and speed.

It was a pleasure to be able to collaborate as a team with client/creator/Loftwork whom each leveraged their networks and skills to overcome these barriers.
In the future, we expect to be handling Chromashine® at MTRL TOKYO/KYOTO. Please experience the mysterious shine by handling it directly with your own hands.

In this exhibition, we did not use the existing Chromashine® acrylic pigment, and instead we thought about a painting method that maximizes the beauty of the interference colors unique to Chromashine®. However, even if the method to express the beauty was decided upon, it was very difficult to paint it by that method and to evenly apply the tape painted by that method to the cloth. We ran into a wall many times during the prototyping process but were able to complete the exhibit space with the support of the skills of Japanese craftsmen and suppliers.

Also, due to differences in time zone and attention to details, it was necessary to closely interact with the Italian office right up to the start of the exhibition. I think that we were able to work closely with the client, and had good teamwork in handling such correspondence and documentation during the production.

The whole city of Milan during Milan Design Week is literally a festival of design, and there was a tremendous amount of people and enthusiasm. Visitors came to the booth from morning till evening, and there were unexpected encounters and talks that may lead to future business. By helping the exhibition and feeling the local reactions directly, we felt again the significance and possibilities created by entering an international exhibition.